Back in August I posted about the 2014 Asian Pear haul, and promised to update once I’d done something with them. I’ve tossed easily 20-30 lbs of them so far this week — they’ve splatted onto the ground, rotten and moldy, and with the help of Sasha’s extension picker we’ve hauled in several tubs of pears and there are more on the tree. I took about 10 lbs to school this morning much to Ms. Donna’s delight.

First up, I got a slicer-corer to make anything I attempted easier. I picked one up at the local grocery store and it is the best just-under-$5 I’ve spent in a long time.

Then, (with the help of Sasha who’d already made a batch or two), I made Pickled Asian Pears with Lemon. We made 14 pints, after a mix up about pints vs. quarts. I think we quadrupled the recipe? So now I’m looking for ways to use pickled Asian pears — I’m sure there will be posts on that to follow. 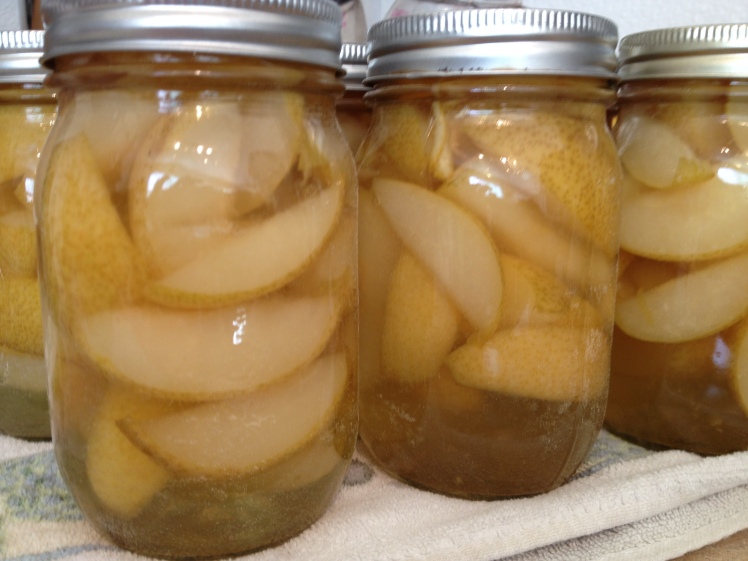 After that, I made Ricotta Stuffed Asian Pears with Cinnamon, they “looked interesting” and the children flat-out refused to eat them. I’m not sure what I was expecting, but my expectations were not met. The ricotta/honey tastes good, but it doesn’t work for me with the pear. 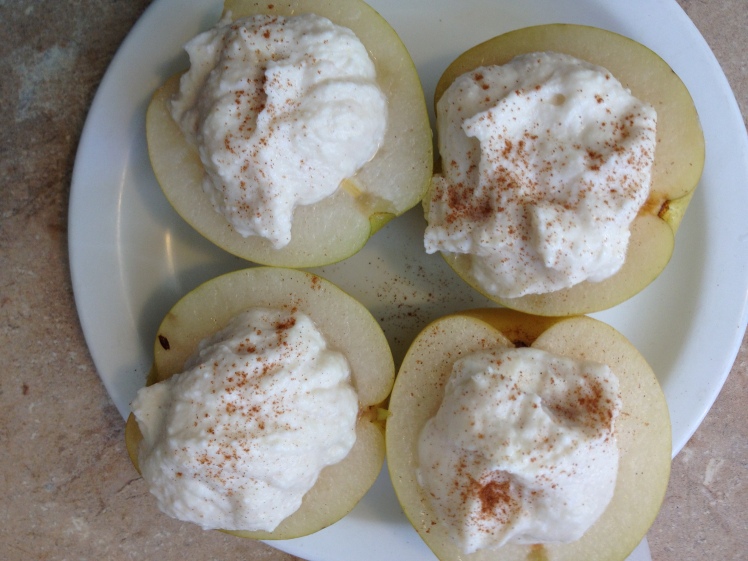 Finally, I tried Dried 5-Spice Asian Pears. I dehydrated them in the oven. I didn’t bother with the 5-spice (didn’t have any on hand), and other than miserably heating up the house all day long, and forgetting to core them first, they turned out pretty well.

I’m also trying crock-pot pear butter again — I tried the batch Sasha made and it was less revolting than my attempts, so I decided to try it again. This time I’m finding recipes that use pear butter so it does not languish in my pantry. Toss a bunch of pears in the crock-pot, add some cinnamon sticks, cook on low for 20+ hours, food mill, put back in the crock pot, add some sugar, cook some more, hope like mad the apple butter recipes that I pinned work well with pear butter as well — fruit butter is fruit butter, right?

What about the Asian Pear Sorbet and Lemon Sorbet with Asian Pears? Those aren’t going to be made any time soon, freezer space simply won’t allow for the ice-cream bowl right now, and I’ve had really hit-and-miss luck with internet sorbets.– the last one turned into a frozen block of fruit juice.

I also stand by my previous assessment of Greens with warm breaded goat cheese and fig balsamic — candying, etc. gets to be too much work for a salad — eventually the asian pears might make into a salad, we’ll see.