My track record with live Christmas trees is fairly dismal, see previous years: 2006, 2007, 2008, 2009 and 2011. Gavin is opposed to artificial trees, and I dislike the debris dropped by previously “live” cut trees – when we moved in our in-floor heating vents were clogged with pine needles (yuck).

In 2011 ago I came across DIY Plans for a “modern Christmas tree” which is similar to the very cool (and not in our budget or practical for our space) Possibilitree. I showed the plans to Gavin when the plans were first published, but our little tree was still alive, so it went no further. This year, all our little Christmas trees were dead, and I showed the plans to Gavin again, announcing that if he wasn’t going to build it for me, I was going to build it — how hard could it be, the plans only call for a table saw and drill press.

Gavin told me to “go for it.” I’m not sure if he was serious or not, but early one Friday (while he was a his back-to-back coffee shop meetings) I took the boys to Lowes to see what we could do. The 6 foot threaded rod, nuts and washers were no problem, the wood was challenging.

Buying one so the 6″x 1″ x 10′ hardwood board felt a little too ambitious. Instead I got ten lengths of 7″x1″ x 8′ pine trim that was 1/4″ thick (I think those are the dimensions, I do know they fit in the car). I don’t know exactly what I used, it was in the pre-cut trims.

When I got home I measured out all the branches and stopped after 30 inches, because really, we have NO space for 40 inches of tree in our living room! I set up some sawhorses in the back yard and got to work with the jigsaw which really butchered the cuts.

Gavin got home when I was mostly through the pile, he was slightly surprised and very relived that I hadn’t purchased a table saw too. He looked at the brutalized ends and promised to show me how to used the miter saw. Best husband ever. 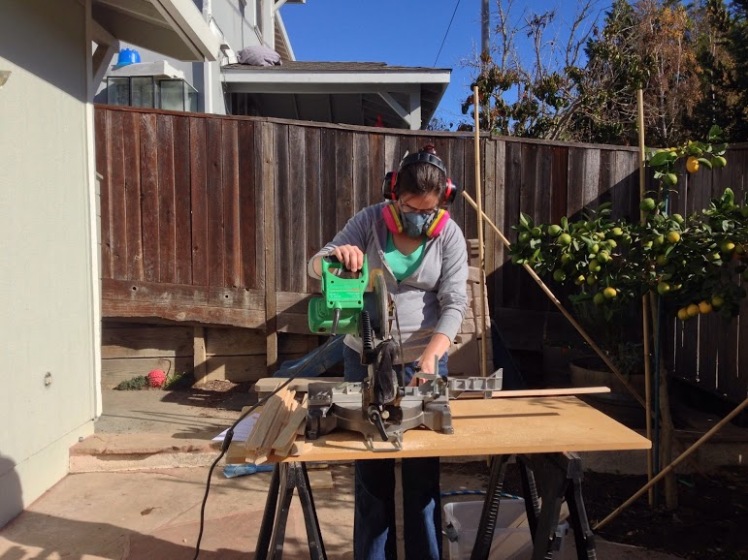 I was “just going to use the drill” to make all the necessary holes, but Gavin decided we would all be better off if I used a drill press. So I got an unexpected Christmas present early. 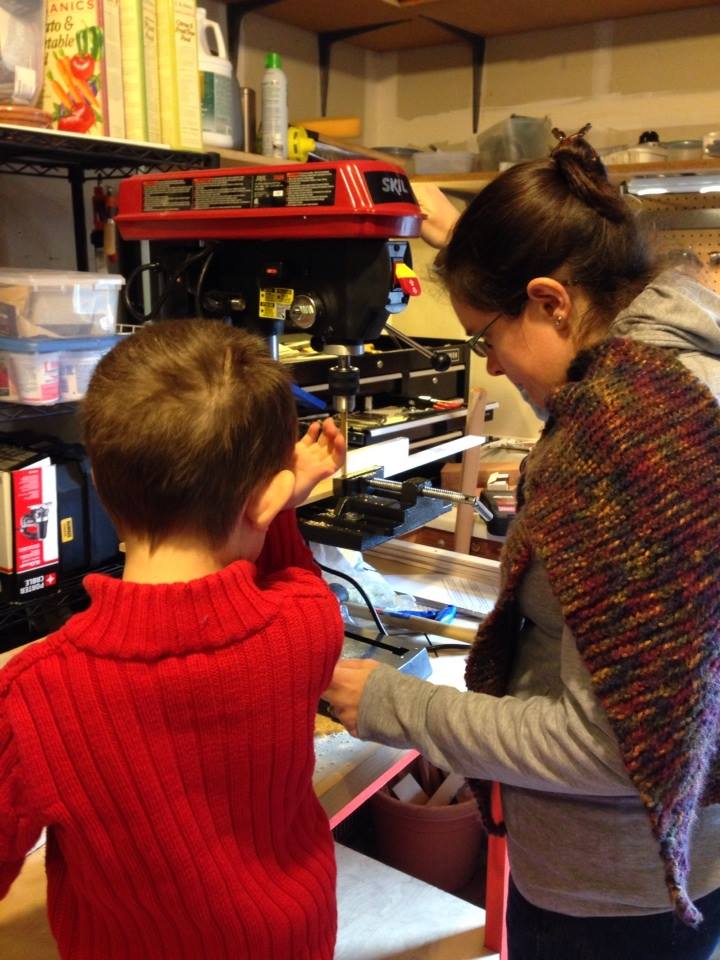 Gavin later confessed he was totally freaked out that I was wearing a super-long scarf while using the drill press.

When that was done, Patrick and Oliver helped me sand the pine to soften any rough edges, and then they “helped” assemble the tree. We modified plans for the base, and instead used 2×4’s to make an “X” (see lower right photo) and a self-locking nut to hold it all in place. I don’t want to know how much force it will take to tip it over. 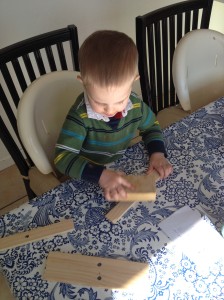 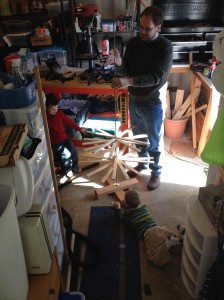 We got some really awesome LED lights on a thin silver wire for the tree – Oliver says they look like fairy lights, they’re wonderful and because they’re LED they stay cool to the touch, so if (when) little hands grab no one gets too hurt. We attached them loosely to the tree using tiny clothespins from the local art supply store.

We moved things around a little (a few inches here, a few inches there), and managed to squeeze the tree into our living room. 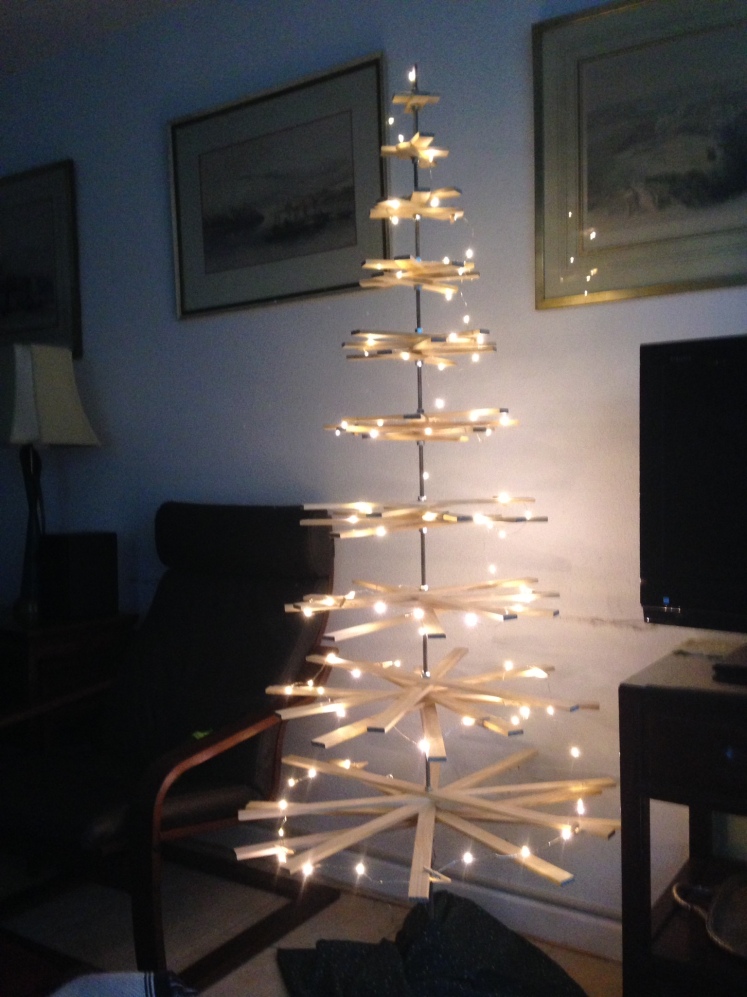 The tree remains mostly undecorated, the “official” reason is we are waiting for Grandma Irene’s arrival (the real reason is little hands that like to touch everything), in the meantime, our tree has been invaded by gnomes — one Autumn Folk, and two from Winter Fair. When the tree gets a shake they go flying. 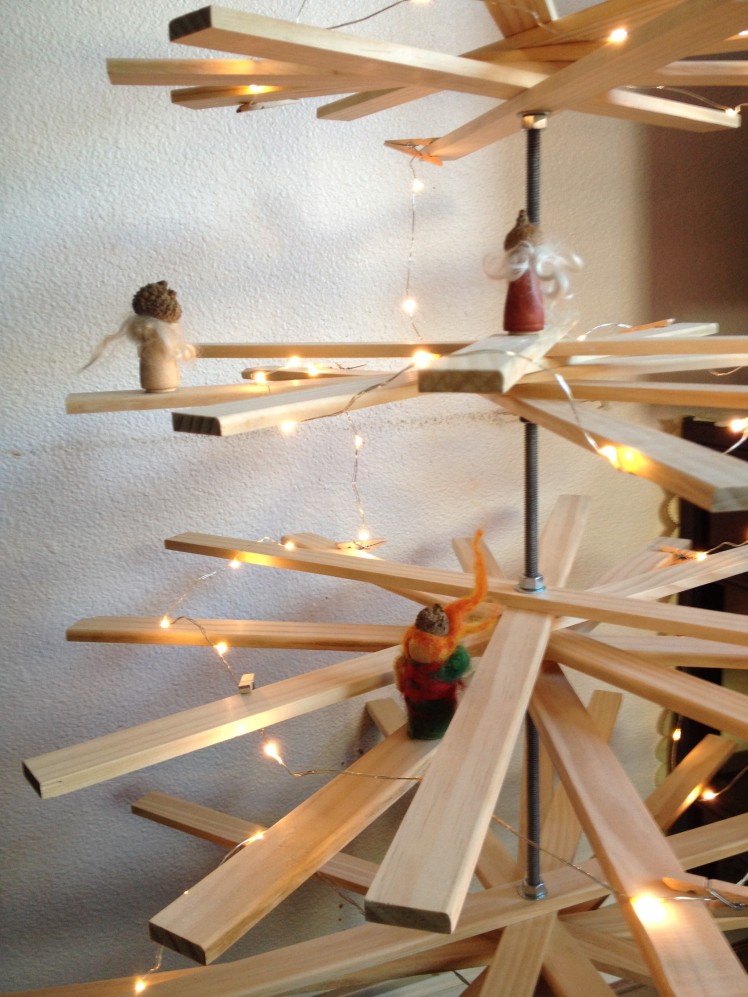 The tree surpassed all my expectations, it is simply stunning. I am still in awe that I made it myself, and of how wonderfully helpful the everyone was with the project. I have the most amazing and supportive husband (secretly I think he would’ve been OK with me bringing home a table saw), awesome sons and some incredibly cute house gnomes.

2 thoughts on “Our Christmas Tree – Hopefully the Final Edition!”