We spent much of today helping our friend Miss E celebrate her third birthday. Miss E had a costume party at Ragle Park, so I raided our costume bin for inspiration.

Patrick went as a little pumpkin, he fit Oliver’s pumpkin outfit from 2009 perfectly, so perfectly, I may have to cut the footies off for it to fit for Halloween this year. P was hailed as “adorable” and mistaken for a little girl a few times (pumpkins are nice and gender neutral).

Oliver, Gavin and I went as Star Trek officers (2010’s costume pick). I was unable to borrow Elizabeth’s sexy little red dress (it would make breastfeeding almost impossible), so I wore a red shirt and my LOTR elf ears (I was a Vulcan, and the pointy ears are nice and generic), most of the time P dozed in the Ergo. It didn’t really matter that I wasn’t wearing a Star Trek insignia pin, the ears, red shirt, and accompanying Star Trek Officers filled in the gaps.

The boys and I got compliments on our coordinated costumes, and inevitably people asked if we were Star Trek fans. Yes and no. Yes, we’ve watched all of TNG, but no, we’re not the types who go to conventions, or learn the languages, and I don’t know minute Star Trek trivia (although I think Gavin might know some). I like the costumes because they were simple (and inexpensive) to make, fairly unique among our circle of friends, and easy to spot across the room (or park, which can be really useful when there are lots of kids around). 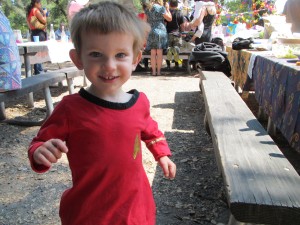 We received a compliment from one of the other mothers, O was “playing so nicely” with her son – a 1 1/2 year old, holding his hand, helping him up the stairs to the slide, etc. O was being “very sweet” with him. It was very nice to hear.

Miss E went as a tiger, but her costume quickly morphed into a tu-tued tiger-butterly/fairy. It was quite the effect. 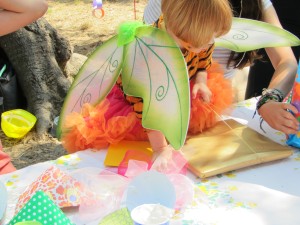