Patrick leads a busy life, no longer is he content with simply eating, sleeping, pooping and repeating (although he still does a fair bit of that), now he has noticeable periods of extended AWAKE! time where he wants to sit up and see what is going on.

The big problem is he can’t sit up yet. So he has to be held up, propped up, or placed in a contraption to keep him upright so he can observe. Thankfully, Big Brother Oliver gives him plenty to watch.

P’s latest contraption is his Hanging Observation Platform (aka door bouncer). We borrowed one when we had Oliver. We gave it back the moment he lost interest in it, we didn’t -and still don’t- want a ton of baby stuff lurking in our garage, but O really enjoyed his door bouncer, and it seemed likely that P would enjoy one as well.

I looked online, $34 seemed a bit much for baby equipment that would just be used by one kid before going on Craigslist/to consignment. I checked Craigslist, and while the prices were a bit better, I didn’t find exactly what I was looking for, so when our neighbor down the street had one at her garage sale, the price was right, and it was in fairly good condition, so I overlooked the funky floral/striped/polka-dot print on the seat (after all, he’s sitting in it and it is low enough to the ground it isn’t really noticeable).

The HOP hangs in the same place O’s did, in the doorway to the laundry room. We have put a small area rug under it so his toes don’t scrape on the tile. A small bolster pillow helps keep him from slumping backwards in the seat and offers a cushioned backrest.

The biggest issue so far is that for the first five minutes P is in his HOP, he is the most fascinating thing in the room (at least in O’s world). O likes to try and “halp!” P bounce, spin and swing… these activities are frowned upon. Thankfully, O looses interest in a few minutes (and after we threaten to confiscate all his other toys if he doesn’t go play with them).

Left to his own devices P checks out the world, acclimating to not being spun, bounced, and jostled at the whims of the toddler. He is still figuring out how to bounce, spin, and kick his legs. He goes at his own pace, taking everything in. The dryer is particularly fascinating, and Big Brother is usually entertaining as well. 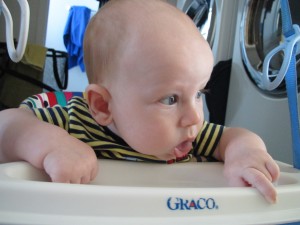 After 10-15 minutes without Big Brother intervening, the HOP becomes dull, holding his head up becomes tiresome and it is time for a boob and a nap.