Today Oliver and I met up with some friends at Armstrong Redwoods State Nature Reserve. We walked along the Discovery Trail and admired Colonel Armstrong – the oldest tree of the group. 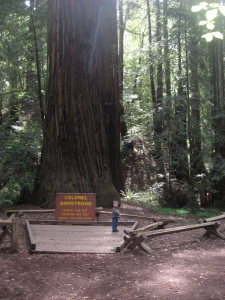 An elderly gentleman informed us that the Colonel’s signage had not changed “since the last time” he had visited 60 years ago, so the tree was probably now even older, taller and wider than posted.

We walked in a large circle along the creek, not straying too far from the cars and bathrooms. The kids seemed quite content with the paths we had chosen, so we opted not to set out on any of the hiking trails.

We had a light lunch near Colonel Armstrong as the picnic area was a 1.5 mile hike which seemed a bit much on hungry stomachs. After lunch, we walked around a little more, and then headed off for more grand adventures (aka running errands).