This morning Gavin, Oliver and I piled into the car and drove to Oakland airport to pick up Oma. Oliver wasn’t overly thrilled to see Oma again. He demanded “up!” and then hid his face in my shoulder, and glared at the world.

When we got home, Oliver warmed up a fair bit. It helped that Oma had brought him a small chocolate bunny, and stuffed rabbit that snores. He also snagged her bag of Southwest pretzels and biscotti.

Once he’d eaten the bunny’s head, O decided to show Oma his collection of garden tools, and around the backyard.

Oma attempted to teach O how to use the broom and shovel to put the mulch back where it “belonged.”

Although these attempts at teaching basic housekeeping were epic failures, that didn’t stop them from having quite a bit of fun together. 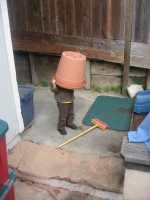 When it got too brisk to play outside, O showed Oma his room. They sat together at his table and read a few books until around dinner time.

After dinner, Oma showed O how to draw boats and O enhanced the piece with extra bursts of color.