This is part 1 of 2 of the post about Abby & Mark’s wedding weekend.

As previously mentioned, Gavin, Oliver and I attended a wedding this past weekend. Gavin has known Abby, the bride, since high school, and Mark is the person who showed Oliver how to most effectively bang his spoon on an over-turned mixing bowl. They are an adorable (geeky in a good way) couple. Gavin was a Chuppa holder, and as a member of the Wedding Party (and spouse of a Wedding Party member) we enjoyed partaking in all weekends events when we were not chasing after Oliver.

Saturday morning as Gavin took part in Important Rehearsal Activities, Oliver and I hung out in the lobby of the Seascape Resort with several of the other Wedding Party’s Significant Others, and Aaron W* (aka Tito). 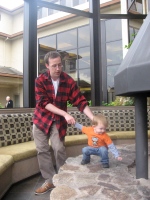 Oliver with Isaiah; Some of the Wedding Party; Oliver with Aaron W. (aka Tito)

After lunch at a local cafe, Gavin and I took turns watching the Playback Theatre performance by Living Arts Playback Ensemble. One of the groomsmen, Jon, shared a story about Abby and Mark during their time at college: they were playing an RPG in which Mark was a Crusty Sea Captain whose ship had just been taken by pirates. Mark was loudly and actively encouraging the other gamers to ROW! ROW! ROW! to help him catch his ship, the others started rowing along as well and after a while the befuddled passers by began to row as well. Soon the entire audience erupted into an enthusiastic chanting of “ROW! ROW! ROW!”

Shortly after that, Oliver and I had an enjoyable walk, when we swapped out, Gavin and Oliver had fun at the park.

The day concluded with the Rehearsal Dinner at the Shadowbrook Restaurant in Capitola. Oliver worked the crowd during cocktail hour, and was very impressed by Isaiah’s camera. We sat with a very baby-tolerant group, Isaiah, Jessa and Aaron Bell. Oliver went on to awe the crowd with his astounding behavior during dinner. He also investigated the fountain, and left finger prints on the windows.

Oliver with Isaiah and Jessa; Admiring the scenery and checking for birds

*There were six Aarons there for the wedding, Aaron W carpooled down from Sebastopol with us. To distinguish himself from the others he requested to be referred to as “Tito” for the duration of the weekend.