Oliver’s new winter hat arrived via UPS today. I would like to thank the UPS man for NOT ringing the doorbell as O was zonked on the floor in the living room and such a distraction would’ve woken the little fellow.

I was initially concerned it was too big for him (I got the smallest size), and then I was concerned he didn’t like it. 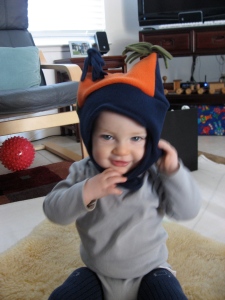 At first, he tried to pull it off and fussed a good deal about wearing it. It is a little big, but it fits well enough for now and he still has room to grow.

Then he wore it for a little bit (unvelcroed) and he seemed to like it a bit better.

In fact, I’m pretty sure he’s thrilled by it. He definatly looks adorable in it. I’m looking forward to the weather being cool enough that he can wear it regularly.