The 80s have started to creep into O’s toy box as the lone Popple of my youth has taken up residence. My token popple was a small Flower Popple (apparently it was named Honeysuckle), and by the time I acquired it (in first grade) they were decidedly less cool (undoubtedly because I finally had one).

This particular popple survived my childhood, the move to Boston, and subsequent move to and move in California. It has spent most of the last three years of its existence living in boxes, and rubbermaid containers.

Last autumn the popple had a life changing experience, as I was unpacking boxes and sorting through “stuff” for the Pudge’s future nursery I set aside all stuffed animals, small toys, and child-appropriate items. The popple was added to the pile.

Several days ago I went through the container of stuffed creatures looking for small, colorful, manipulatable toys that were also texturally interesting. The popple, with its garish pink body, shockingly blue troll-hair, green-and-yellow under belly, transformative abilities and tail was a clear choice. 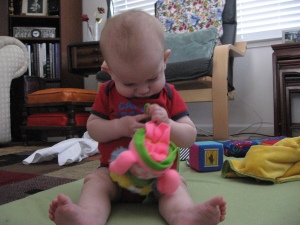 After being run through our washing machine (surviving, looking no worse from the experience), it was placed in the eager clutches of the awaiting baby. Easy to pick up, twirl around (by the tail), tasty and textured, the popple met and slightly surpassed my (admittedly low) expectations.

The popple has held up remarkably well, while it screams “vintage 80s” it was not actively played with for 20 years (approximately 1/2 of its life was spent in storage, so yeah, it looks fairly good). If O continues to enjoy the toys of my youth, I may have to introduce him to my Good Luck Bear (Care Bear).