Oliver’s interest in all things grown up continues. This morning he decimated Crate & Barrel’s newest catalogue in an attempt to emulate Gavin reading the Economist at the breakfast table. He pulled it off the table, smashed it on his tray a few times, chewed on the front cover and the first few pages, then proceeded to leave damp bits of catalogue all over the kitchen floor.

Thankfully, Gavin does not chew up his Economist, instead he accuses me of relocating them to new random places so they are never where he left them. I will not comment as investigation on this is pending.

O has also been making a more concerted effort to sit up on his own. He’s not putting himself in the sitting position just yet, but when he’s put down sitting up he’s making a bit more effort to stay that way (unless a toy he wants is out of reach, then he flings himself in its direction, usually with a resounding thud).

To help with this new effort we’ve added some new projectiles to his arsenal, and we’ve made sure all his thuds happen over the carpet. 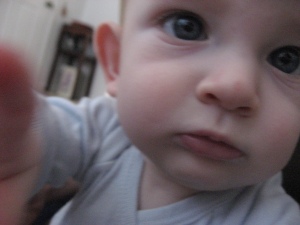 Of course, what O really wants is our camera (better yet, one of his own), but he can’t have it. Until he’s old enough to properly appreciate our electronics we’re distracting him with other, less fragile things.

Quaker Oats not only help reduce cholesterol and make Vanishing Oatmeal Raisin Cookies, they also come in a brilliant cylinder that is capable of 5-10 minutes of infant entertainment. It rolls, it’s light, it has a lid, and it can be thrown. 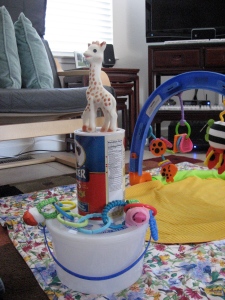 The coolest thing about all this is that I can stack the containers on top of each other. This lasts until O decides he really wants the ice cream bucket (about 30 seconds).

Eventually, when he’s more stable (and a little older) we’ll break out the Duplos, wooden blocks, and other slightly more advanced toys. For now, we’ll let him roll after the oat meal canister, he seems to enjoy it.