Please visit Adventure Spoon of Adventure and Doom at www.avidinkling.com for the back story.

When breakfast was over, the Four Duckies Spoon and cereal bowl easily slid into the dishwasher, while the Adventure Spoon had to be hand washed.

The Adventure Spoon did not enhance breakfast in anyway. If anything, breakfast was made tedious. The little red light was annoying to use, and really rather pointless for eating cereal.

This episode of Matlock was The Author. It was a rerun of a rerun, and even my Adventure Spoon could not make it any more exciting. The internet was also rather dull this morning, no exciting news, no thrilling e-mails, and no one on AIM to commiserate with.

Every few weeks I sit down with my Recipe Binder, stacks of Cooks Illustrated, and assorted cookbooks to plan out meals for several weeks at a time. This time, I had my Adventure Spoon. Useless does not even begin to describe how unhelpful it was in the process. 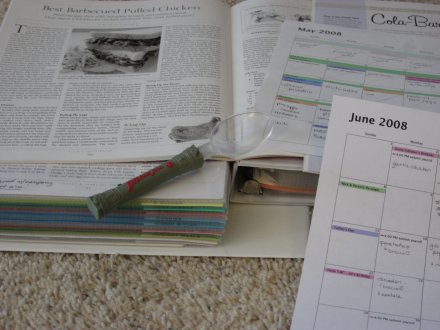 The Adventure Spoon is just that, a spoon. It can’t write, erase, or make recipe suggestions.

Dull Daily Event: Yard Work
Task: Sweeping the back deck, picking up branches and twigs that have jumped free from the neighbor’s trees

The Adventure Spoon failed to make an impression on our rabbit, and the squirrel was equally unfazed.

Demon Kitty ran off before I could ask for his opinion. Instead, it opted to stand on our table and watch as I swept the leaves and picked up branches. Totally useless, totally unadventurous.

Lunch was cheesie toast (on home made bread) and strawberries. While I was in the kitchen I decided to see just how much the Spoon could hold. The Spoon held less than a level tablespoon, and more than a level teaspoon. After a few more attempts I found it held about 1 1/4 teaspoons, and because of it’s shape, it is impossible to level off. Useless. 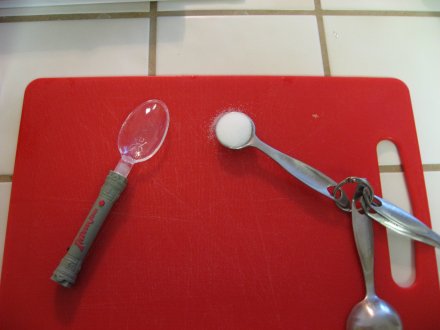 Dull Daily Event: Puttering Around the House
Task: Walking around the house putting things back where they belong, light cleaning and general tidying up

Two words: Epic Fail. The Spoon is useless at helping tidy up around the house. If anything, it gets in the way and is one more thing to carry. Granted, it does fit easily in a pocket, but what good does it do there? If anything, keeping it in your pocket is a nuisance because it stabs you in the leg when you go up stairs.

The Spoon sat by as I put away the tissue paper and bags leftover from our Anniversary, and looked on with a bored expression as I sorted through the mail. Completely useless and decidedly unadventurous.

Today the topic was the documentary entitled Jesus Camp. We’d watched the movie a few months back, but Comrade was watching it for the first time. She was appropriately horrified, and quite relived that her experiences at Cedars were nothing like that.

The Spoon did not come up in conversation, and sat on the stacking baskets completely ignored.

Final Review: As the day wore on the Adventure Spoon became increasingly less novel. The little switch to give power to the light was stiff and difficult to turn on, and the little press button to make the spoon light up was awkwardly positioned causing my thumb to cramp. By the time I was ready to start dinner prep the Adventure Spoon had been regulated to the kitchen hutch, out of sight, out of mind.

The Adventure Spoon is made of all around FAIL. It is lousy as a cereal spoon (although it might be OK for more generic spoon uses that don’t require exact measuring, it really isn’t worth the effort it takes to clean it), and does not enhance daily activities in any way. Getting one is not even a good reason to buy a box of Frosted Flakes, and I can’t imagine who would seriously “collect all three” or buy them off EBay.

Not only is the Spoon poorly designed, it is poorly named as well. I did not have one Indiana Jones like adventure. There were no cannibals, no snakes, no Nazis, and no hidden treasure. Nothing even remotely adventurous. “Cheap annoying light up spoon” would be much more accurate.

Confused? Read this first to understand what this is all about or visit https://avidinkling.com/2008/05/22/adventure-spoon-of-adventure-and-doom/.

One thought on “Thursday aka Adventure Spoon Day”