Last night Abby, Mark and Jon came over for dinner. It was a nice excuse to use our nicer plates and fun goblets. We had lasagna with caesar salad and homemade bread. Dessert was lemon cheesecake (also homemade) with hot chocolate or hot cider. 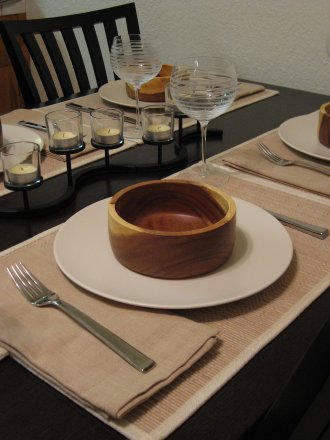 My choice of place setting confused Gavin, apparently he’d “never seen” these napkins until they magically appeared on our table about two nights ago when I figured they should get out and see the light of day occasionally. They lived in a drawer in our Somerville apartment along with some other napkins, now they live in a bin in the garage.

This was my second batch of homemade no-knead bread. We had it with basil olive oil and vinegar (which was largely ignored), and it was viewed as quite a novel thing.

The lasagna was the simple recipe from the Baker’s Edge website, and everyone seemed quite enthralled by how cool the pan was (and how useful it was for lasagna). It was quite easy to cut up and serve, and with five people there were fewer leftovers for Gavin and I to enjoy. 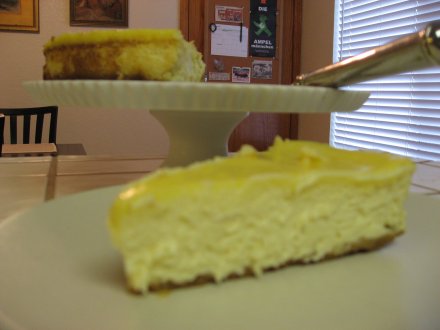 The cheesecake was deemed “fantastic” and “amazing.” Jon described it as “whipped by the angels in heaven.” I was a little worried it might be too lemony but it was amazing, creamy, smooth, and tangy. Perfectly complimented by hot chocolate (or hot apple cider).

Flicker seems to be down right now so I will up load more photos later.