Photos of our adventures in San Francisco can be found in our Picasa Album Oct/Nov & probably Dec.

The Palace of Fine Arts

Nick and I arrived in SF a little earlier than we anticipated and parked near the Palace of Fine Arts. We walked around it a few times, then along Marina, and around the Palace of Fine Arts again. It was built by Bernard Maybeck (same guy who did Prin), and if you donate $10,000 to the restoration project you’ll get “significant recognition.”

After we met up with Dulce we drove to Fort Point, and quite a few other notable areas. Along Haight Street, through Golden Gate Park, past the Japanese Gardens, up and down some rather impressive hills, down Lombard street, and I’m sure I’m missing a few other notable locations.

We stopped at Coit Tower where Dad befriended the woman operating the elevator, and everyone thoroughly enjoyed the spectacular views. 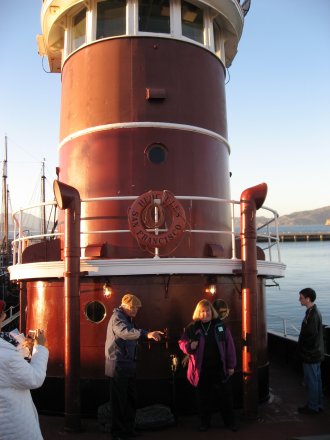 We finished our touring at the San Francisco Maritime National Historical Park, where Dad shared his vast and varied knowledge about vessels of all types. They have a nice range of ships from different time periods, and they allow school groups to overnight on some of the vessels.

This evening there was a school group, several were lugging lines, a few were attempting to cook, and most of them seemed mildly disgruntled by the experience. Parents stood by as reenactors barked out commands. I was quite pleased we were not partaking in the adventure.