Pumpkin pie seems to be a staple at every Thanksgiving gathering. I am not a huge fan of pumpkins (or pumpkin pie). In my world pumpkins are good for carving faces into, and/or ending up as centerpieces.

That said, I have spent the last week or so finding and comparing pumpkin cheesecake recipes.The recipes that called for hot water baths during cooking, six eggs, pounds of pumpkin and unique egg-separation methods all got ditched.I wanted a simple cheesecake recipe, not a complex dish that would dirty every mixing bowl in the house.

I finally settled on a recipe for Sweet Potato Cheesecake. The following internal dialogue ensued:

But I thought you were reading pumpkin cheesecake recipes.

Then why sweet potato?

Why not? They’re both orange, and canned pumpkin looks awfully similar to canned sweet potato.

So armed with a recipe for Sweet Potato Cheesecake, I did a very simple substitution: I replaced the sweet potatoes with canned pumpkin. Ta da! Pumpkin cheesecake! 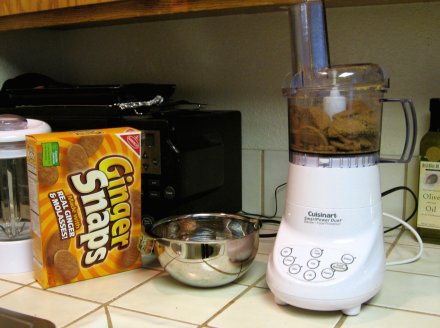 I was a little worried that the pumpkin might be overpowering, but the batter tasted sweet, somewhat like a spice bread with a slight hint of pumpkin. Quite good. 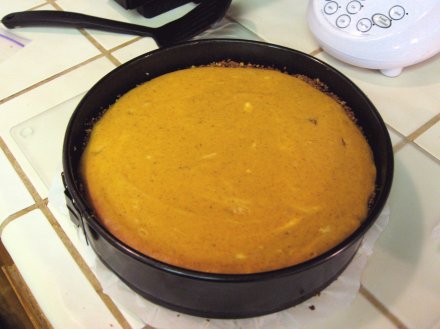 I triple checked the oven temperature (it’s not paranoia I’m cautious), I am so glad we have an oven thermometer, it’s made such a difference. The oven was at exactly 325*F, and it managed to stay that way for the duration. I let the cheesecake cool off in the oven for about an hour or so, topped if off, and it’s now in the fridge.After it chills for a bit longer it’s going to the freezer to sit until Thanksgiving.